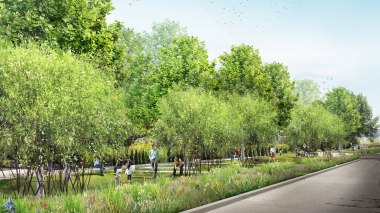 According to Seattle Parks, construction will require a three month detour route on 14th Ave. NW between 58th and 60th streets. They anticipate completion of the park in late spring 2018.

This park is the culmination of over 12 years of community involvement and persistence. Thank-you to the many, many neighbors in the East Ballard Community who have supported this project. And if you’re new to the neighborhood and are wondering what this new park is all about, here’s an overview:

What’s the park going to look like?
Gemenskap Park is going to be a 2 block linear park that runs along the east side of 14th Ave NW from NW 59th St to NW 61st St. The current sidewalks on the east side (for these 2 blocks) will be replaced with brand new 12′ wide concrete sidewalks that will be wide enough for walking and wheeled activities. The park will include rain gardens that will not only filter stormwater before entering Salmon Bay, but will also provide a buffer between park users and vehicle traffic. Vehicle traffic will run side by side on the west side (there will no longer be a median) between NW 59th and NW 61st.

How are cars going to be diverted at NW 59th and NW 61st going north?
Speed limit on 14th Ave NW between Market and NW 65th will drop down to 20 mph (today, it’s 30 mph). This significant drop in speed will allow for vehicle transition to be done at stop signs. There will most likely be a 4-way stop at NW 59th and another at NW 61st. If you are traveling north, you will stop at NW 59th, transition diagonally to the west alongside south bound vehicles and then stop again at NW 61st where you’ll transition back to the east side with vehicles separated by a median again. If you’re traveling south, you’ll stay in the same lane along 14th and will stop at NW 61st and NW 59th.

What about lighting?
Pedestrian scale lighting, will be provided along the 2 block park that should provide adequate lighting of the walkway without affecting neighboring homes. The existing street-scale lighting will remain as well.

What’s going on at the NW 60th intersection?
The intersection at NW 60th will have a 4-way stop and will be raised to sidewalk level so that people driving across the intersection will encounter a bump up when approaching and a bump down when leaving. People walking or biking along the sidewalk through the intersection (north/south) will not experience an elevation change. There will also be bollards on the north and south sections of the intersection on the park side to provide a buffer from vehicles.

What about the trees?
Some existing trees will be removed and replaced with a mixture of larger and smaller trees where it makes sense. The significantly large tree near NW 59th on the east side will remain in place and accommodations will be made for its root system in the new sidewalk design.

Will there be play structures?
Not at this stage of the project. There will be a few grassy mounds to play/roll around on, plus the rain gardens will be accessible for learning and play. There will be grass space for lawn games as well. Once the park is complete and the community has played in it for a while AND there’s a strong interest for structured play equipment, this could be added at a later time.

What about an offleash dog park?
Sorry, no offleashing in this park. It’s really not big enough. You and your leashed dog, however, will be more than welcome to enjoy the park!

For additional information and to stay up to date on construction, please visit http://www.seattle.gov/parks/about-us/current-projects/14th-ave-nw-park or contact Parks project Manager, Toby Ressler at Toby.Ressler@seattle.gov.