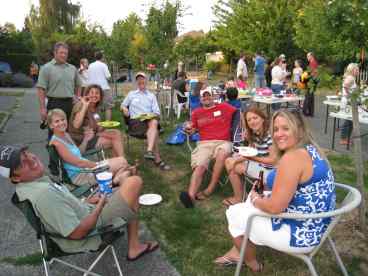 It takes gemanskap to build a park!

Readers may remember that back in March, Seattle Parks and Recreation asked the community to submit name suggestions for the 14th Ave NW Park. The Park naming committee received over 60 unique name suggestions and after long deliberation announced their decision in a press release yesterday afternoon.

The new name for the 14th Ave NW park will be Gemenskap Park (pronounced Yuh-MEN-skawp), which is the Swedish word for community. The name was chosen “because this was a community initiated project and because of the area’s Swedish history and influence, the Park Naming Committee believes this unique park will help build community by turning parking into park space. While there are several Ballard parks that have Norwegian names, this is the first with a Swedish name.”

Now that the park has a name, let’s hope that it’s a good sign that the City will be breaking ground in the near future! We’ll keep you posted as we learn more.