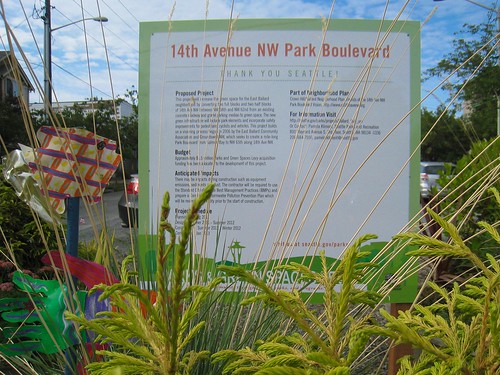 News has been slow these past few months about the 14th Ave NW Park Boulevard. We have a small update to share today, with hopes to have much more information to share, including proposed drawings and a schedule within the next few weeks. The good news is that although progress was stalled early this year due to the changes in the Mayor’s office, our Parks Dept. Project Manager, Patrick Donohue, was given the thumbs up  last week to move the Park project forward again. Some decisions have changed since our September update, but most are the same. The following are some quick points of interest:

No bicycle facility:
This is new since September when we advised that there would be a 3 block long cycle track connecting the Greenway on NW 58th and running up along the park. Further analysis revealed that a dedicated cycle track would take away much of the available green space for the park and wouldn’t make sense to have for just 3 blocks. If, in the future, SDOT agrees to fund a dedicated bicycle facility from at least Market to NW 65th, then accommodations could be made to include it within the park.

New sidewalks along the 2 blocks of the park:
The existing sidewalks on the east side of 14th Ave NW between NW 59th and NW 61st are planned to be replaced with new sidewalks incorporated into the park design.

What’s next?
The folks at Mithun and Mayfly are on board again and will be preparing designs for the next SDOT review. In the meantime,  mark your calendar for the April 19 Adopt A Street Cleanup along 14th!